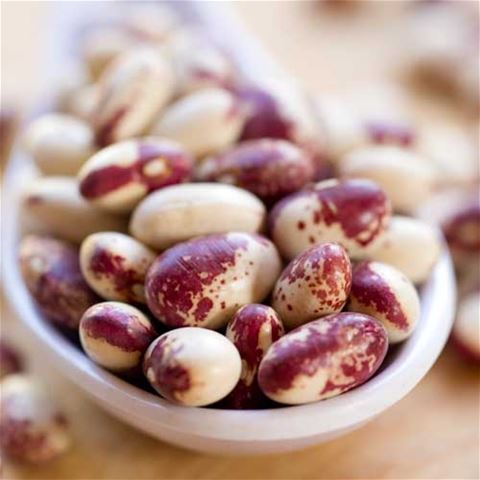 COUPEVILLE IS A TINY TOWN. A historic sea-faring village nestled on the inner northern curve of a meandering Pacific Northwest island. Its population is small, just 1,831 as of last census, and overwhelmingly nice.

Until you mess with their Rockwells.

The Rockwell is an attractive bean. Creamy white and pleasantly round with a smattering of maroon on the hilium side (that’s the bean belly button for those who are unfamiliar with bean body parts).

It’s not a floozy pink bean like the plump Lina Cisco Bird Egg. Or a 70’s bad paint job bean like the baby-poop mustard and red Tiger Eye kidney. Or boringly staid and proper, like the barn-brick red and white Jacob Cattle bean.

The Rockwell is an attractive bean that you just plain enjoy looking at. Until you cook it. Then you like eating it even better.

So does everybody in Coupeville.

AT ONE POINT IN MY VARIED FARMING CAREER I had achieved what seemed to be the ultimate pinnacle. I brought to harvest about 2000 lbs of Rockwells. It was, by all accounts, about 10x’s more Rockwell’s than had been grown in Coupeville for years.

Once quite abundant and easily available around town, Rockwells never achieved commercial success and became a scarce commodity as the farm families — who traditionally maintained them — moved off their traditional land. By the time I started growing them, there were only three of my neighbors still actively planting them and that was mostly just for their personal use.

So my ‘big Rockwell harvest’ created a bit of a minor media sensation. I made the front page of the local news with a ‘waterfall of Rockwell’s’ pouring out of the auger of our 1964 International Combine.

The night the paper came out I had several messages waiting from one of the town residents. The mother of one of my high-school classmates and the sort of woman you wanted on your side, never, ever the other way around.

“Georgie, I saw the paper. You have Rockwells. Are you going to be at the market with them? I need Rockwells. For the church potluck.”

“Georgie. I’m sending Jack over for Rockwells. He’s coming tomorrow. I need to get my Rockwells.”

“Georgie. Jack is coming. Well, you just better, you better have some Rockwell’s for him. I don’t care if they are already sold to your restaurants or whatever. I need those Rockwells. The church you know. Jack is coming…”

I replayed the messages for my husband. He agreed. I was just threatened, ever so nicely, over dry beans. Then I ran right back outside and packaged up some Rockwell beans for Jack. Because, well, I’m not entirely stupid.

THE HISTORY OF THE ROCKWELL IN COUPEVILLE has always been a bit murky, but one thing everybody agreed upon. Elisha Rockwell brought it to the area in the late 1800s. Then he left town and nobody cared. But they did love that bean.

The Rockwell is uniquely suited to growing in the Coupeville area. It is a short-season bean with ability to germinate in cool temperatures. In a growing region surrounded on either side by the ’50 degrees if you’re lucky’ Salish Sea, growing quickly and in cool weather is a decided advantage. In fact, I grew many other heirloom dry beans over many years and I never found a varietal that germinated as reliably or matured as quickly as the Rockwell.

But its flavor — delicately rich with a savory broth — and its texture — creamy and thin-skinned yet substantial, keeping its form in all but the most abusive recipes — is what really seals the deal.

The Rockwell is a class of bean often referred to as a ‘borlotti’ bean. The most commonly known is the classic “cranberry” bean. What many (quickly corrected in Coupeville!) mistake the Rockwell to be. Borlotti beans are famous for making ‘cassoulet,’ a French ‘bean stew’ that reigns supreme on fall and winter menus. Even Julia Child’s sung the praises of the cassoulet…

“Cassoulet, that best of bean feasts, is everyday fare for a peasant but ambrosia for a gastronome, though its ideal consumer is a 300-pound blocking back who has been splitting firewood nonstop for the last twelve hours on a subzero day in Manitoba.”

As far as the Rockwell goes, well the people of Coupeville would argue there is no better cassoulet bean then their beloved Rockwell. Only they call it “Rockwell Baked Beans.” And they’re darn serious about that.

IN COUPEVILLE, EVERY SUNDAY AT NOON the Methodist Church Bell tolls. It’s been via the church, most specifically the weekly Sunday potluck, that the love — and fierce competition — for the Rockwell truly took hold.

If you ever happen to get one of the old ladies of Coupeville talking about the Rockwell away from the ears of the peers, then you’ll catch an earful.

“The Shermans? They put WHITE sugar in their Rockwell’s. Can you believe that? White sugar.”

“And the Engles, Marion told me they used KETCHUP. Now why would they do that? Ketchup? Rockwell’s don’t need ketchup. They’re not a Navy bean! Might as well just dump your baked beans straight out of the can, if that’s what you’re going to do…”

But that was only out of earshot of polite society of course. Instead, every Sunday, after service, they would chitter and chat and line up their earthen ware pots of gently steaming Rockwell Baked Beans on the church buffet line. Every family matron proudly bearing their family’s favorite Rockwell recipe. Let she who takes home the first empty pot win (not that they would ever brag about it!).

Hence why my in-town neighbor was so keen to get her hands on some real, honest to goodness Rockwell beans.

For the church potluck, you see. Gotta have those Rockwells.

Soak the beans overnight. Place beans in 2 quart oven safe casserole dish with a lid. Add onion, garlic, salt pork and half of the brown sugar and dry mustard.

Cover with water, enough to cover the beans by about double their depth. Put lid on, place into oven at 325 to 350 degrees. Bake for 3–4 hours. Check every 30 minutes, stirring and adding water if the beans start to dry out.

When the beans are soft and creamy, add more brown sugar, dry mustard and salt and pepper, as desired. Take lid off and cook an additional 15 minutes to caramelize the top and cook off any excess water.

Where can you get Rockwells? Well I no longer grow them, at least enough to have to share (that’s a story for another day).

Try Local Harvest. Or, grow them yourself. Uprising Organic’s sells planting stock from seeds they originally sourced from me.

You can use Cranberry, or Cannelini, beans as a replacement for Rockwells in the recipe. But, they won’t be as good. Nothing beats a Rockwell!

(P.S. In the interest of protecting my good name, all quotes are entirely fictious and any resemblance to actual Coupeville names was totally by accident, I swear. Maybe it was the Hancocks who used the ketchup? Hard to say. I make no claims to their authenticity and have probably exaggerated a wee bit in the spirit of good Coupeville fun. Also, Jack’s wife is still going strong. And you know, I’m not messing with her).

This piece was originally published on Medium.