Marketing Lessons From the Biggest Apple Campaign in 20 Years 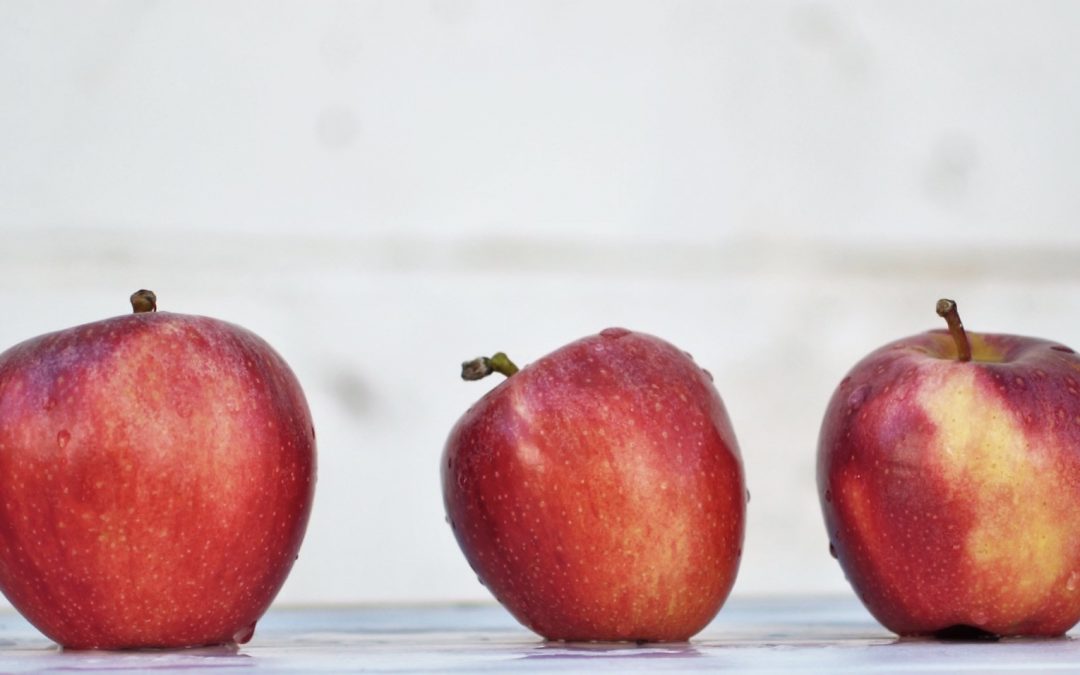 No, I’m Not Talking About the iPhone

They also have a website, a Twitter feed and, by the love of all that is holy, brand ambassadors.

The Cosmic Crisp has been featured in Martha Stewart, Bon Appetit, Fortune, Time, BBC and Today. Just to drop a few names. That was BEFORE any consumers had tried a single one. They just started shipping to grocery stores on Dec. 1st.

Once I put aside my jealousy — imposter syndrome triggered by an apple is just plain silly, right? — I decided to think about it in a more positive, ‘what can we learn from this’ sort of terms, right? If an apple — the humble Malus domestica of Adam and Eve fame — can garner international media buzz, then just about any brand should be able to level up their marketing game.

So, what marketing lessons can we take from the Cosmic Crisp? Ones that don’t involve pie?

It Takes Time To Get it Right

Despite feeling like an ‘overnight internet sensation’ the Cosmic Crisp apple has actually been in development for more than a decade. Apple breeders (don’t giggle, that really IS a thing) started working in 1997 at Washington State University to develop a new apple varietal for Washington state apple growers.

It was time for Washington growers to look for something new.

Enter the breeding endeavour that culminated in the Cosmic Crisp. Or what was originally identified as varietal WA 38. The Cosmic Crisp is a cross between the Honeycrisp and Enterprise varietals, and has been described by fans as the ‘apple holy grail.’

Why? Well because not only does it score high on all the consumer fronts — perfect balance of sweet to tart, crisp texture, good mouthfeel, thin-skinned but rugged enough to stand up to packing and shipping demands, attractive deep red — the Cosmic Crisp is reputed to last 12 months in storage. A so far, unheard of feat for apple varietals and a trait that makes apple farmers practically pee their overalls in excitement.

But 12-month storage viability isn’t what has the internet buzzing. About an apple, for chrissakes.

The Power of the New!

At my weekly shopping trip I noticed the shiny new “Cosmic Crisp” floor display enticely installed in all its glory. As a farm and food writer, the Cosmic Crisp buzz had first grabbed my attention in a Huffington Post piece back in October. (Yes, it made the Huffington Post too, sigh). After goggling at the $4.99 price tag — more than double the price of most other apples — a grabbed a few and headed home.

Does the Cosmic Crisp live up to to the buzz? There is perhaps no better judge of the power of a marketing campaign than teenage girls. Luckily I had two at my disposal.

I sliced up some Cosmic Crisps — nice color, good uniformity and yes indeed, a crisp texture that sliced nicely — and plated them up. I offered them to my daughters and asked what they thought.

“Yeah. It’s an apple. It’s good. What?”– the 16-year old. Followed by an eye-roll and sigh of expaseration.

Then I told them. It’s a new apple. A varietal that was just released. You couldn’t get it, ever, until just a few days ago.

“Wait…This is a new breed of apple? That’s so cool!”– the 14-year old. She even looked up from her cell phone.

And the clincher from the 16-year-old…

“Really? That makes it taste sooo much better!”

Don’t get me wrong, the Cosmic Crisp is a good apple.

But as a long-time farmer, foodie and eater of many things does it beat out the Fuji? The fancy Japanese apple that comes encased in its very own tiny sweater. What about the heirloom favorites of old? The McIntosh? The Jonagold? The Winesap? And perhaps my personal favorite, the “Cox’s Orange Pippin?”

Ennnh. It certainly deserves a plate at the table as a darn tasty apple. But I wouldn’t say it’s ‘the best.’

What the Cosmic Crisp does have going for it one thing none of those other apples can claim — it’s new. At least to the people that count. The ones that buy it.

A life-time ago, I worked in wholesale gift manufacturing. Every year it was all about the hot new ‘trend’ of the year. Penguins! Frogs! Adorable wooden ducks! OMG Hedgehogs! For whatever reason, our human brains are primed to get excited by ‘something new.’

The trick becomes, how far can you leverage that to your brand’s advantage?

How many times have you got suckered into some fancy packaging or a slick marketing campaign to realize the product you just bought was total crap?

The Red Delicious apple was at one point about 90 percent of the apple crop. It came to prominence in the 1950s, when shoppers moved from buying straight off the farm and at centralized grocery stores. The Red Delicious has ‘eye appeal’ plus a great name.

It’s a big, voluptuous red apple with the ‘perfect apple shape’ memorialized by Snow White. It won heads and tails over the traditional green, mottled, lumpy and funny-shaped apples of the day.

But they tasted terrible. Back then and today.

Ever had a mealy, insipid mouthful of apple that made you want to spit it out? Bet you a $100 bucks it was a Red Delicious.

In fact, it has such a reputation for being terrible the Huffington Post published an article headlined “This is Why Red Delicious Apples Suck So Hard.”

The Red Delicious, granted, has had a hell of a run despite of that. When it came onto the scene, consumers had never had the experience of ‘pretty packaging.’ But times they are a’changing. Consumers are savvy and great packaging is no longer the exception to the rule, it’s expected.

So you can only get so far with flashy packaging and a marketing message, you still have to ‘deliver the goods.’ But, how good are we talking?

A branding message and marketing campaign primes a consumer to approve of the product (or service) before they even access it. After all, paying good money for a product that ends up being complete crap is a statement on the buyer’s ability to be a smart, discerning consumer. The vast majority of buyers really don’t WANT your product to suck. That’s the power of a good marketing campaign. Not only does it promote your product, it predisposes your consumer to approve of your product when they do purchase it.

I know as business owners we all want to think our product, or what we offer, is the best out there ever. It’s important to believe in that about yourself and deliver to your expectations. As an expert in your field, nine times out of 10 your product likely will meet or even exceed your customers expectations. But even if you do have the most amazing product/service in the world, without a good branding campaign the only one that will know that is you.

Case in point, the heirloom Winesap apple has been described as “like biting into a fine glass of Chardonnay.” But has it made it into Martha Stewart’s magazine?

So, the Cosmic Crisp doesn’t have to be, hands down, the most insanely tasty apple ever grown on Earth to maximize on its marketing potential. It just has to be good enough.

Bite the Bullet and Make the Commitment

The marketing success of the Cosmic Crisp is fueled by money. A lot of it. To the tune of $10 million. That’s not something every small start-up has just sitting around waiting to be thrown around at PR companies.

But, the lesson is still there. If the product is worth the time and effort to create it — and Washington apple growers have already invested just $40 million to grow the dang thing — then isn’t it worth the money to market it?

Just an ‘average’ ROI for marketing is considered 5:1. So, if the Cosmic Crisp apples marketing campaign invests $10 million in marketing it should result in at least $50 million revenue. That seems like an awful good start toward paying off that an initial investment for cementing a message around a crop that will be producing for decades to come.

The Cosmic Crisp growers have done another very interesting, and novel, thing. At least when it comes to apple growing.

They are limiting who gets to play. A lot.

Traditional apple breeding has worked like this. A university comes up with new varietals. Any farmer who wants it pays the university a licensing fee. They can plant however many they want.

But that created a problem. When interesting new apples introduced into the marketplace began capturing a premium price — the Honey Crisp, a Cosmic Crisp parent has been an excellent example — too many growers got excited and planted them. That ended up flooding the marketplace and the prices crashed. Which really sucks when you are talking about an investment in infrastructure (aka a tree) that will take at least a few years to start bearing and produce sellable product. But has the potential to yield product to sell for decades once it gets going.

Past failures on this front prompted the Cosmic Crisp to be developed under a new model. It is patented, intellectual property and only a limited amount of ‘select’ growers are being licensed to grow a small amount of trees. Cosmic Crisp apple growers, only Washington-based of course, had to enter a lotto to even get the opportunity to pay the licensing and royalty fees to grow them. Money which will then be maximized to pay for, amongst other things, marketing the brand.

What they have done isn’t rocket science in the business world. And not every industry lets you pull this off. But as much as you can, through licensing, patents, whatever tools are at your disposal, if you can control how MUCH of your product gets sold while maintaining a high demand, well… that’s marketing 101.

In the apple-growing world eventually there will be another apple that comes along and attempts to take the “Cosmic Crisp” off its apple throne. But those growers will have the invest the years, and money, in the development and marketing to get there. In the meantime, the Cosmic Crisp farmers will reap the rewards, and hopefully make some money growing apples.

Of course, the proof will be in the pudding, and whether the Cosmic Crisp scores a giant win or this whole thing gets chalked up as a ‘cosmic’ failure, will take several years to determine.

Though it does have me wondering how many more Instragam followers than me they’ll have in a few years time (versus just a few months).

On the other hand, who cares?

Go out there and take the apple world by storm, Cosmic Crisp! I’ll be seeing you at the pie counter.

This piece was originally published in Medium